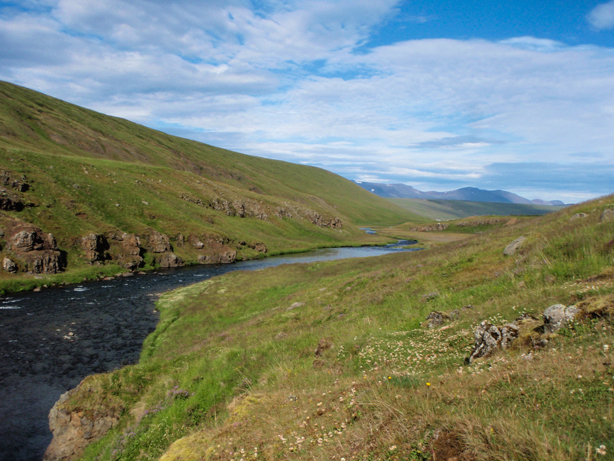 Torfhvammshylur is one of the deacon of Vatnsdalsá river. Salmon can take the fly everywhere in the pool and often more wide in the pool than one can imagine. This is on of the pools that catches a big salmon year after year. You should fish this place from the east waterside and you should not wade this place, at least not to begin with - particularly by morning.

Upmost we start to fish “Torfa” and you should notice a spiky rock that sticks up from the surface. Right below this rock is a good location and often many salmons lie there waiting to be caught. Let the fly go about meter below that rock where the race ends. Below that rock is another location where you can catch salmon. There is a big rock you should easily see and the salmon often lies above this rock and also in the race. You have to wade a bit to reach the rock and you should let the fly go about 5 – 6 meter below the race.

To end this beautiful pool you should go again to the upmost area of the pool and wade to cast towards the race on the other side of the pool. Salmons could lie along the waterside.

This is many anglers' favourite pool. Here it's best to begin fishing quite far up and cast on both sides of a big pointed rock which can be seen in the river, slightly to the west of the centre of the river iddle. To begin with it is not advisable to wade out at all as fish can be lying quite close to the east bank where one should be standing. They can also be lying further down along the east bank.

The best spot for striking in this pool is probably at the corner of the cliffs where the greatest depth seems to be. There and down along the cliff it is often possible to see unbelievable shoals of fish. At the downstream end of the pool is a big rock, which can be seen under most conditions. Fish will take the fly all around this rock, but rarely any further down the pool except in the autumn.